A Fun day At School/Time To Party

Every year, schools in Costa Rica plan a super cute celebration for the kids right before they go on vacation in July.  It's their winter break party and it happens every year the last day before the kids go on a mid year school vacation for 15 days.

Every school does their celebration differently and each year it varies what type of party the kids will have.  This year at the kids' new school, there were a lot of fun activities and games.  Each class was given a participating country in the World Cup where they could decorate their class with French decor, wear Germany colors or paint their faces in the Costa Rican flag colors (just to name a few).  Kids were treated to burgers and juice bottles, played Just Dance and watched movies.  It was an awesome way to kick off the start to winter vacation. 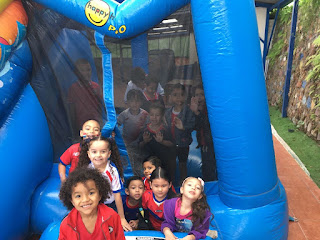 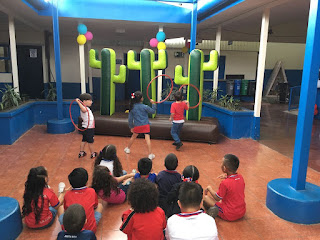 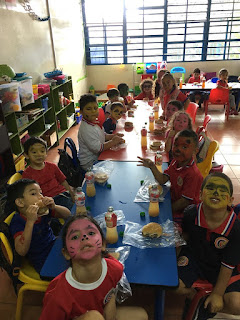 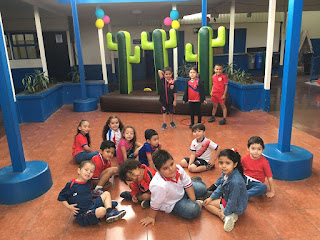 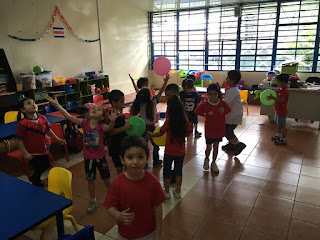 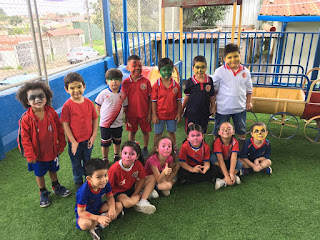 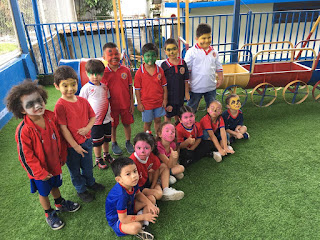 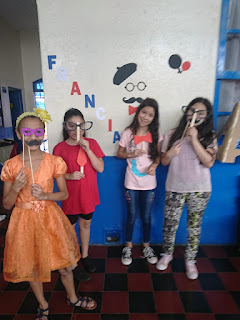 Planning Another Beach trip And Appreciating The Arts

Let me be the first to say congratulations to my daughter and her class for their magnificent performance at the school's art festival on Wednesday.  They did an amazing job and now they're heading off to the city wide competition to perform their poetic piece. 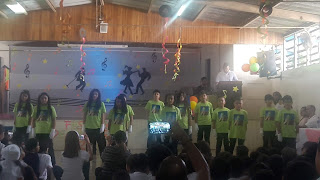 Another piece of good news I wanted to share involves my family from Boston.  My nephews will be coming to visit me for 2 whole months and we have a ton of fun activities planned in preparation for their trip.  We will be heading to the beach at the end of the month as our first fun family outing and I could not be any more excited.  Beach getaways always get me excited to be honest.  I booked the Blue Conga Hotel in Puerto Viejo and we'll be going for 2 nights and 3 days at the end of the month. We haven't been to Puerto Viejo as a family in over a year and my nephews (and my mom who will be coming with my nephews and staying for 2 weeks) have not gone back since their first visit in 2012.  I am looking forward to the trip as it'll be a time to recharge and unwind.  Besides, what's not to like about going to the beach?  The sand, the surf, the food; it could not be any more amazing. 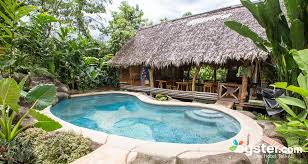 Ok, maybe not actual trees but baby plants that may one day turn into trees.  It's important teaching kids from a young age about how to take care of our planet.  And what better way to start teaching them the importance of caring for our planet than by having them plant 'trees'.  Mother Earth needs all the love and care she can get and we know we can never have enough trees.  Trees are important for the planet and for human kind and now our little ones know too.  Besides, what kid doesn't like gardening. They get to play with dirt and get their little hands dirty all while having fun. 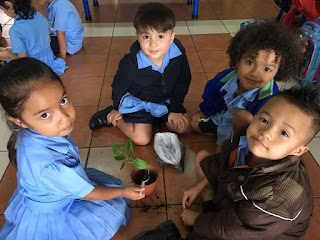 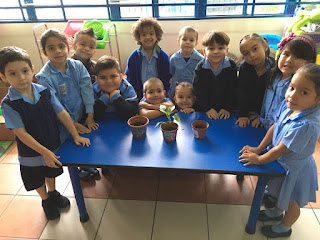 Ask almost any kid growing up in Costa Rica what they want to be when they grow up and the answer will most likely be a soccer player.  Living in a country heavily influenced by 'futbol', as is the correct term in almost every other country than the USA, it is more than just a game it's a way of life.

When it came time for the kids to pick a career for the day, where they would get to dress up as said career, I knew both my boys would want to be soccer players.  My middle son especially LOVES the sport.  And dressing as a soccer player is so easy as he already has a uniform.  But when it came time for my 4 year old to choose, I wanted him to be more unique.  As I knew majority of the kids would dress as a "footballer", I thought it would be a good idea to show him a few options and have him choose.  And he chose wisely.  As he loves music and to sing, he chose to be a musician for the day.  More accurately, he chose to be a Rock Star.  Check out my little Carlos Santana look alike. 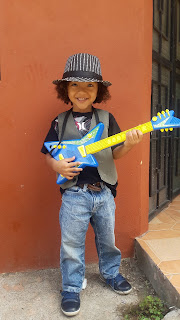 And as it turned out, there weren't actually THAT many soccer players on career day after all.  I did see a lot of doctors and nurses though, as well as  few police officers.  But there were a few standouts, like the astronaut, the chef, the construction worker, the president/business man and the teacher.  The kids for sure had a blast and it was all in good fun seeing what all the different careers kids chose for the day. 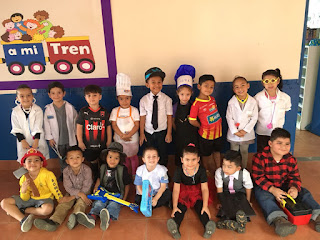 How different today seems to me than Mother's day.  If you don't have a father figure in your life, you might have completely forgotten what today was.  There wasn't as much hoopla as there usually is for Mother's Day.  Not a lot of fanfare and certainly not as much excitement for the day, although it is just as important to celebrate fathers as it is to celebrate mothers.  But somehow, the day just does not seem as important.

Granted, everyday is father's day especially for those dads that go above and beyond for their family.  The ones who take the time to be a dad and know what being a father truly means. For those dads out there, they don't need a day to feel special.  They are celebrated each and everyday.  Just by being  there for their kids day in and day out makes everyday a great day to be a dad.
Posted by Rina at 1:33 PM No comments:

Almost Time For A Break

It's now almost mid June, which means report cards have been issued and the kids have a 2 week break coming up at the end of the month.  Not sure what we will be doing on break but it will be a nice welcome from the hustle and bustle of the morning routine.  Another added bonus is that my nephews and my mom will be here to spend some time with us and to me, the more the merrier.

I foresee trips to the Children's Museum and the Amusement Park in our future.  As well as trips to the park and the mall (and a few other fun places).  While my nephews are here for the most part, my kids will be in school and will only have mainly weekends to spend with their cousins.  So I want to make the most of the 2 week vacation from school to soak up as much fun as we can.  I am a planner but this time around, I just want to live in the moment and see where each day takes us.  Who knows, it might even take us to the beach for a day!
Posted by Rina at 6:25 AM No comments:

There have been so many firsts for my little man since he started preschool and I am positive there will be many more to come throughout the school year.  Last week his class had a day of sharing snack, where each child brought in something to share with the class.  The teacher asked for Akeem to bring in a large bottle of yogurt and a few other moms brought in assorted fruits, jello, cookies, and juice.  Just look at those precious faces enjoying a day of sharing. 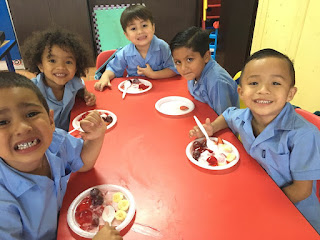 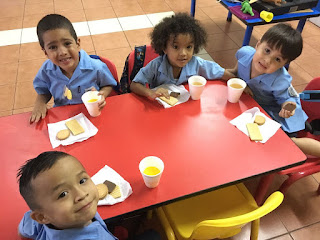