I Have This Feeling

I have a sneaky feeling that Spring break will fly by and we'll have nothing to show for it, except maybe a few late mornings and even later nights, afternoons spent on the PS4 and lots and lots of watching TV shows and movies.

I want to plan to DO things, like taking the kids to the park and the museum.  Taking them to Chuck e Cheese for the very first time.  Maybe even a day trip to the beach for some RandR.  But I don't know if we'll get to do any of those things.  The park maybe.  Chuck e Cheese is a strong possibility.  The beach, probably not.  And I think we're kind of over the museum for a while.

It's nice to have plans, especially fun things to do when the kids are on break from school.  But it's so much easier to just stay at home, lounge all day and do absolutely nothing.  Does that make me a bad mom?  Depends on who you ask.  My kids are happy just being home.  They love going out and having fun too but if we don't, it's not the end of the world (hopefully).

I'll probably make plans to take them someplace fun and if the weather is nice, we will more than likely spend a lot of time outside playing. Kids sometimes just need to be kids and enjoy their childhood too and nothing says childhood more than a regular day outdoors kicking the ball about and just playing. That's all they really need.  Not fancy expensive day trips.

So, like I said, I have a sneaky feeling Spring break will be spent mainly at home, doing a lot of nothing.  And we're all fine with that.
Posted by Rina at 6:34 PM No comments:

It's not a super big deal, but we met Chase.  Yes, Chase!  The pup from the popular preschooler kid cartoon Paw Patrol.  It just so happens that my 4 year old is a big fan and so when the opportunity arose for him to have the chance to meet one of his favorite cartoon characters, we took it.

It was a quick meeting.  And without all the fanfare that can be caused when it comes to meeting popular TV characters.  At first, my little boy refused to take a picture with Chase.  He would of course say hi and shyly give him a high five.  But a picture was out of the question, until it was time for us to leave.  He not only took one picture with Chase but two and now we will have this memory for a lifetime. 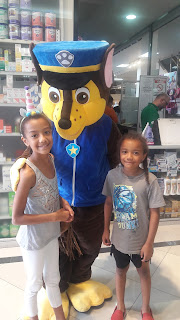 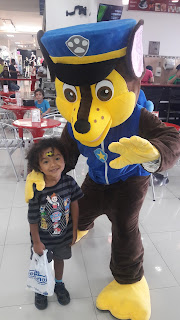 Looking Forward To A Break

Spring break is coming.  It's just around the corner and I cannot wait.  Technically, here in Costa Rica, kids don't get a Spring break.  The term they use is Holy Week.  Kids get a week off from school the week before Easter Sunday and Costa Ricans take the opportunity to go on vacation.  When you go outside and notice how sparse the streets look with hardly a car in sight you wonder if the entire country went to the beach.

For me, the school year has been amazing up to now.  I love the kids' new school.  I love the hours, the ethics, the workload.  I love it all.  It has been a good year thus far so it's not like I am in desperate need for a break.  But a nice week off will be a welcome change from the 6am wake up calls and the day in and day out routine of getting uniforms ready, packing lunches and getting homework done.

The kids are anxiously looking forward to the week off, as any kid would.  A nice break from school work and just being at school in general will do them some good to unwind and relax.  More time spent in front of the TV or playstation I am sure.  But I will also make sure we have a few fun days outside, enjoying this warm weather we've been having.

As of yet, we have no plans for the school break.  My oldest son turns 18 on the 28th and that is a HUGE deal and a cause for celebration, but as it is HIS birthday and not mine, I await his suggestions of ways we can celebrate his 18th year of life.  We had plans to celebrate at the beach but as it is one of the busiest times of year for vacationers, we were out of luck finding a hotel at a reasonable price that was available.  Honestly though, it doesn't matter how we celebrate,  as long as we do and we will.  And we will also enjoy our Easter break, soaking up the freedom it brings.
Posted by Rina at 7:18 PM No comments:

Getting All The Things

I will be the first to admit that I have a bit of a problem when it comes to shopping.  I don't have a shopping problem necessarily but I do have to be conscious of how much I spend and reign myself in at times with how many things I buy, especially when it comes to the kids and holidays.

Easter is coming up and with it, Easter baskets and Easter eggs.  Baskets need to be filled, eggs need to be filled, so on and so forth.  I, personally,  like to keep Easter simple but lets face it, I have a hard time simplifying any 'major' holiday.  I do try though so this year, I went for a more minimal approach when it came to the kids Easter baskets and the filler items that go in them.

I also like to keep holidays budget friendly because I do love a good deal.  But even when I find items on a budget, buying a lot of those more affordable items can add up.  I have to remind myself that it is only Easter, not their birthday or Christmas, so there is no need for me to bombard my children with more stuff they don't need.

So Easter this year will be simplified as much as I can simplify the holiday without taking away everything that I love.  I still want the holidays to be special because kids are young only once for such a short amount of time and I like to take advantage of that.  I like to make sure that Easter baskets are fun and exciting but not be too overwhelming.  So for 2018, I made sure to get a few fun items I know the kids will love along with a few practical items as well.  That mixed with just a small amount of fun treats, like a chocolate bunny and some jelly beans and Easter baskets are ready to be searched out and found on Easter Sunday.
Posted by Rina at 3:06 AM No comments:

If you happen to live on earth, you must have heard about a certain movie that has been blowing up the box office lately.  A movie about a place called Wakanda with a king named T'Challa who happens to have panther powers?  I am referring to THAT movie, a marvel of a movie (pun intended), titled Black Panther!  Such an amazing movie with amazing graphics, storyline and characters.  And of course, one of my now all time favorite superheroes.

I finally took the kids to see Black Panther in theaters and it was an afternoon to remember.  The hype was pretty spot on and the movie proved to be  one for the history books.  Finally, a movie with a predominantly black cast and black director shattering box office numbers.  And no coincidence that Black Panther was released in February, a month dedicated to the celebration of black history.

Even though Black Panther is just a movie, it has reignited black pride in so many and given renewed hope to a people still fighting for equality in a time that seems rife with turmoil. Movies are usually meant to entertain us and allow us to escape from our real world problems.  Super hero movies, especially, are meant to be nothing more than a good time, 2 hours of cinematic adventure where the good guys win.

We should just sit back and enjoy a fictional character in a fictional city fighting fictional bad guys.  But for so many, Black Panther hits too close to home so that the line between fiction and reality seem blurred.  Movies can change the way we see the world, change the way we think, even how we act.  And with Back panther, lets just say black people can start taking their pride back and who knows where that can eventually lead.  Anyway, with all that said, we had a blast at the movies and cannot wait to see Black Panther again. 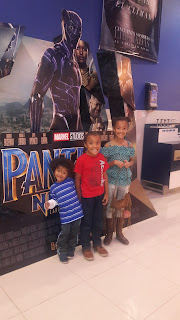 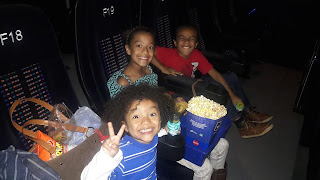