You know how you get sucked into trying to make everything you do perfect?  Where you try to outshine everyone else by doing extra?  Trying to keep up with the Joneses?  Well, now that's called the Pinterest trap.  Everywhere you look these days, especially on the internet, everything seems to be so pinterest perfect and we have all fallen into the trap once or twice or maybe a 100 times.

When I start party planning for one of my kids' birthday parties, one of the first places I look, and maybe the only place, is the internet.  And what I find can be mind blowing.  The Pinterest world is filled with amazing, unique and fun ideas for every occasion.  From party decor ideas to kinds of food to serve at gatherings to even how to spruce up your home for any holiday season, Pinterest is the place to go for some of the best ideas for whatever your heart fancies.  Need ideas on how to decorate a bookshelf, Pinterest.  Need ideas on how to decorate for a specific themed kid's party, Pinterest. Need fun food ideas, Pinterest.  The ideas are endless!

But there is a trap.  You can get sucked into trying to do it all, which can lead you to go Pinterest crazy which is never a good thing.  Going overboard with any event or occasion can lead to stress.  So I have learned my lesson.  I still go on Pinterest (although I have yet to create an account) but I try to limit myself to just a few fun, cool ideas.  Trying not to recreate everything you see on Pinterest can be hard but keeping it minimal is good for my stress level and sanity.

This year, I'll have three parties to plan for and yes, I will be using Pinterest for the plethora of ideas the site has to offer.  But I wont go mad trying to copy every single idea I can find.  I will stick to the ones that I think are best suitable to me and my planning and decor style and call it a a day.  So Pinterest Planning, here I come.

I have no phone.  No cell phone that is.  In this day and age, being without a cell phone makes me feel helpless.  In a sense, that rings true for me as a mom of 4 kids with busy schedules and a sometimes hectic life.  I have school groups and extracurricular groups to keep up with. If there is information of importance to be shared, it is shared through the group chats and without a phone I am lost.

For instance, last week there was a last minute schedule change for the kindergarten class and I had no idea.  I showed up to drop my son off at the normal time only to find out kids were supposed to enter about 2 hours earlier.  With only 40 minutes left of school, I dropped my son off but I was not happy.  No phone meant I was clueless to the new time change and so my 5 year old suffered for it.

I also use my phone to film my You Tube videos. My channel has become a part of my life and I have been pretty consistent with my uploads, at least one video a week.  Without a phone with an HD camera, I am unable to film or upload videos and that stinks.

So, to remedy the problem of me not having a phone, I went right away to find out how much it would cost to have mine fixed.  To my unpleasant surprise, fixing my 2 year old phone would cost almost as much as buying a brand new one.  Well, maybe not almost as much, but pretty damn close to half the price of a new phone.  So hubby convinced me to just get a new phone. However, that poses it's own set of problems.  First, money is tight right now and buying a new phone was not a part of the plan for me nor a part of my budget.  We could potentially buy a new phone just an older version for a pretty decent price but I guess hubby doesn't think that's worth it.  A newer model phone, essentially an upgrade of what I had would cost a bit more but in the long run would prove best.  But of course it comes at a price.  A not so cheap price.

I knew I'd need a new(er) phone eventually, but I was hoping to hold out until next year.  I wanted to save up and do a bit of research and get a phone I know I would love.  For me, I don't care about the latest bells and whistles.  I just need a working phone with a good camera and the ability to roam the internet.  I have my work cut out for me.
Posted by Rina at 10:43 AM No comments:

Another new year, another start to a new school year.  The first few days back to school went without a hitch and everything went smoothly.  We all got up on time and got out the door in a timely fashion.  It was an almost perfect first day back, except for the fact that the kids did not want to be back at school just yer.  Understandably, most kids don't really like going back to school, especially after a super fun summer.  But such is life and since school is a part of life when you're young, you just make the most of it.  And to make the first day few days back a little more fun, I packed the kids some super yummy snacks and lunch to get excited about the school day.   Here are a few pictures of the kids' first day back to school. It's a pretty important year for my daughter, as she's in 6th grade this year and in Costa Rica that means it's her last year in 'middle' school.  She will be graduating at the end of the year and heading on to high school next year.  There will also be a lot of upper class-man celebrations and activities to come this year, which ill hopefully mean a fun and exciting year for her. 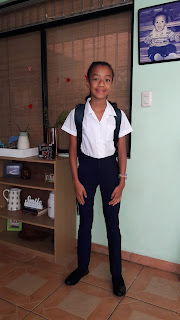 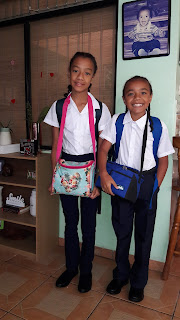 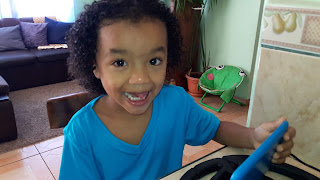 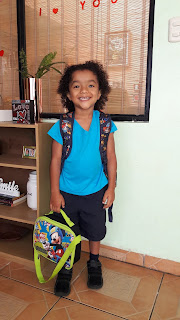 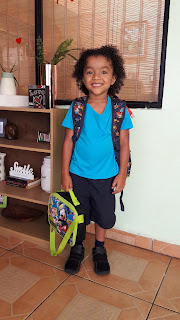 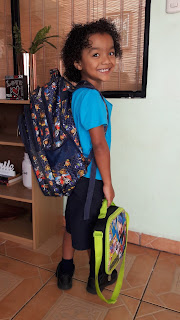 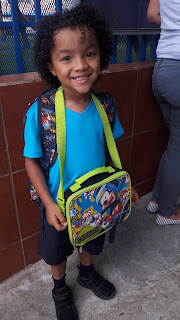 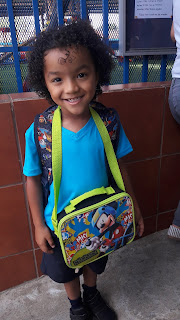 Here's to a very fun, exciting, successful (and hopefully stress-free) new school year!
Posted by Rina at 4:43 PM No comments:

Well, it's back to school which means it's back to the grind.  I was able to fit in one last big, fun activity with the kids to the jump center trampoline park.  Then after all that jumping, we headed to one of our favorites restaurants for some super yummy food like jalepeno poppers, burgers and pizza. I feel good knowing that the kids had a wonderful fun-filled summer. 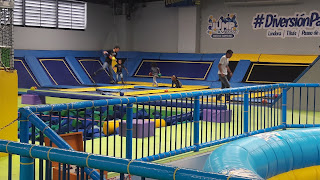 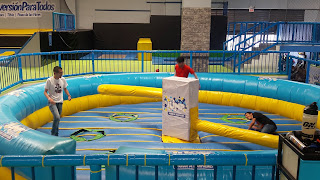