One Less Thing To Worry About

It's hard enough adjusting to change but when that change comes with a new set of rules, things can get a little complicated.  As we tried to settle into our new school routine, trying to get accustomed to a new school, we were hit hard with a rule that singled my son out in a very direct way.

On the very first day of school, my son was told he would have to cut his hair as long hair was not permitted for boys.  That I can understand in a very 'formal' school with very 'formal' rules.  But my son has braids, which I thought left him exempt from that particular rule.  As it turns out, it did not.  They sent home a note stating that braids would also not be permitted as well.  Them were fighting words and of course, I was ready to put on my gloves and go to bat for my son.  Not just for the right for him to have his hair in braids but to let the school know that him having said braids was a part of our culture and I would not be cutting his hair. Not to mention, the thought of him having to cut his hair left my son upset and resentful towards the school.

I really was prepared to take my case as far as it needed to go.  If they couldn't accept my son for who he is and for what we believe, then they would feel my wrath.  Turns out, no wrath needed to be felt.  A little bit of information given on my part and some given to me on theirs, we were able to come to an understanding without me having to compromise too much.

As was said, agreements can be made with civil conversation and a little bit of understanding.  In the meeting it was finally agreed upon that without going against school rules, I would not have to physical cut my son's hair.  I know there are rules and they are there for a reason.  In my case, the school understood that I would not go against what I believed or abandon a part of my culture to comply with a rule that would case me great distress.   With both parties getting what they want, me more so than the school, here comes the tricky part.

As apart of the 'agreement', I now have to style my son's braids in a way that would make them appear a lot shorter than they are.  That proved a little harder than I initially thought, not to mention my son is not entirely on board with that idea.  Finding a way to make long braids seem shorter is not an easy task and this weekend, I will be trying my hand at few styles to find the one that works for both me and my son.  I want him to be happy with his hair, like he is now.  However, I don't want any more drama with the school so it's imperative for me to 'comply' with the agreement or I might have to eventually cut his hair. And since that is not something I am willing to do just yet, nor is it something my son wants, changes have to be made. I just hope the change will make everyone happy. But thankfully, with that issue settled for now, it is one less thing I have to worry about.
Posted by Rina at 9:36 PM No comments:

Valentine's Day is usually a low key holiday for us.  We don't put much effort in celebrating the day and just keep it simple.  The kid's get a few small treats at school and this year I got a couple of handmade cards, which was a nice surprise.  However, we don't usually give gifts.  Except for the occasional bouquet of flowers or a quiet dinner out, hubby and I tend to keep Valentine's Day pretty minimal.

This year V-day was more about celebrating friendship and so I headed out to spend the afternoon with a few girlfriends while the kids celebrated at school and hubby at work.  It turned out to be a very nice day after all, a day of hope that love really does conquer all. 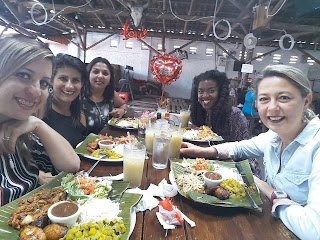 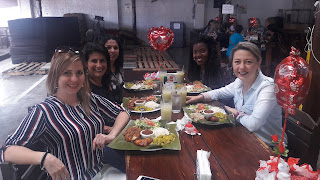 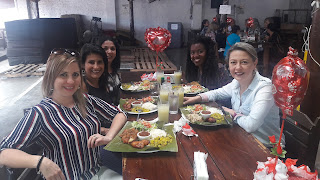 Just For The Fun Of It

On the Friday of the second day back to school and the completion of the week, I decided to take the kids out for a celebratory treat.  Since their new school is now centrally located to quite a few restaurants, we had a few to choose from.  One restaurant in particular had been on our list of places to try so I thought it was our chance to go and check it out.

If you have ever started a new school, you know how tricky it can be to make new friends.  Trying to fit in with kids who already have their alliances formed since the 1st grade.  Having to get used to a new set of school rules and a new school setting.  I thought Papa John's was as good a way as any to close out the week and get the kids excited for the new upcoming school year. 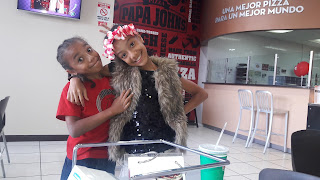 It's been a good couple of years since we went to Denny's so we decided to commemorate the last full day of summer break before school started and head to the diner for dinner as a family. It was an evening filled with pretty good food and some good old fashioned fun. 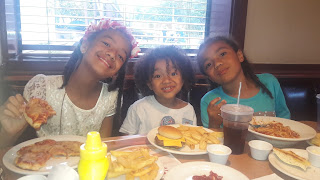 Well, kids finally went back to school after an amazing 2 months of 'summer' break.  It was a truly brand new experience for all of us on the very first day, not just because it was the start of a new school year but also because it was a brand new school as well.

With a new school, new teachers and having to make new friends, I knew the kids would need to take some time getting adjusted.  The hardest part though is getting used to the new schedule.  The kids now get a complete day of school starting at 7am and ending at around 2:20.  For my kids, that is a long day compared to what they're used to. Normally, they would start a school day at 7 and be completely done by 12.

I am hoping for the best year for all the kids in 2018.  Everyone is beginning a new and important phase in their academic careers.  My high schooler finally made it to 10th grade.  My two middle ones are finding their footing in a new school.  And my baby is now at pre-school.

Having to deal with all these 'changes' has not been all that bad.  Yes, my 4 year old did cry and had to be carried into his classroom by the teacher on the first day but he now likes going to school.  It's just all about finding a way to adjust.  Having all 4 kids in school is definitely a big change for me as well.  But I can't say I'm complaining.

The First Day Of School 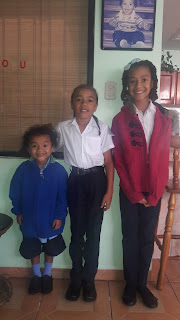